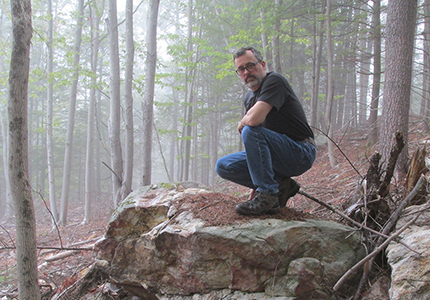 As the youngest of eight, I never had a chance to believe in fanciful childhood things like Santa or the Easter Bunny. Older siblings set me straight, right from the start. There was no Tooth Fairy in the Woofenden household, either – just a straight-up financial transaction: cash for teeth. As the child of a Swedenborgian minister, I had pedantic religious constructs drilled into me, including, for example, an elaborate vision of an afterlife, intended to shape everything about how I managed myself in this life.

Because of this, it might seem reasonable to blame my family for how I turned out. I've been accused of being cynical and introverted. I suppose it's true, although if you put me in a room with a bunch of talkative strangers, I will have a great time.

And having lots of older siblings, especially several with extremely entrenched beliefs that sometimes struck me as silly, also provided me with an opportunity for healthy, oppositional reflection. Sometimes I would think, Maybe my brother is just full of shit on this point. Why should I go along with it?

I found that rational skepticism could be applied usefully to all kinds of things I was supposed to accept. After all, other people had much different ideas. One time as a kid, I was walking home from school and I asked my friend, What do you think happens when you die? and he said, You sit in the ground and rot. He went on to explain that we live on in the memories of others, according to the merits of our lives.

These days I come down somewhere in the middle on that one, between the notion of a seventeenth-century philosopher's heaven, and the casting of the afterlife as a poetic social idea. As the family historian, I rifle through old family documents and photos, some dating back to colonial times, and I catch glimpses of people who came before me. I see pieces of these people in myself and in my daughters. We live in little snippets of time, threads of one generation stitched into the next.

Themes like time and familial connections factor into my stories: How does this piece fit into that one? Where did this come from? How does this all work out, in the grand sweep of time? And what if someone were able to take it a step further, and do something like ... well, read my books. You'll see.

Author Todd Woofenden lives in Maine with his wife and two daughters, in an old farmhouse with a lot of woods in back. He was born in the Midwest, and lived there for a while before moving to the east coast and growing up south of Boston. He has a degree in philosophy from Virginia Commonwealth University, and works in the tech sector as a technical account manager when not writing. He does his writing upstairs in his garret, away from the rest of the world.